PHILADELPHIA, March 31, 2017 /PRNewswire/ -- More than 40 years after the theft of Norman Rockwell's Boy Asleep with Hoe – also known as Lazy Bones or Taking a Break – the painting has been returned to the family of its original owners following a ceremony with Chubb and the FBI in Philadelphia. 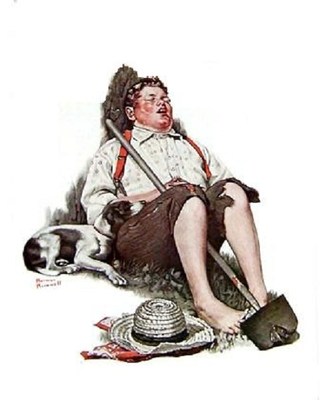 Stolen from the Grant family's Cherry Hill, New Jersey, home in 1976, the family submitted a claim to Chubb, their insurance provider at the time. Upon claim payment, Chubb acquired the painting's title.

"The theft of Boy Asleep with Hoe remained one of the art world's greatest mysteries for over four decades. In partnership with the FBI, we're pleased to return it to the Grant family," said Fran O'Brien, Senior Vice President, Chubb Group, Division President, North America Personal Risk Services.

According to recent news stories, the value of the recovered painting is estimated to be between $600,000 to $1,000,000, which is significantly more than its value at the time of the theft.

"Recovered art is often valued at a greater amount than a similar piece, given its unique provenance. While many often assume a piece is out of harm's way upon recovery, its newfound high-profile status and value can invite new exposures," added Ms. O'Brien. "Existing insurance coverage based on an outdated appraisal, for example, may not provide sufficient protection moving forward. Fine art customers can turn to Chubb for deep expertise, keen marketplace insight and underwriting knowledge to properly protect their most valued possessions."

The Grant family returned the claims payment to Chubb in exchange for the painting. Chubb will donate the funds to the Norman Rockwell Museum in Stockbridge, Massachusetts. Stockbridge was Rockwell's home for more than 25 years, where he created some of his most iconic work.

"We so greatly appreciate the generous donation to the Museum by Chubb," notes Norman Rockwell Museum Director/CEO Laurie Norton Moffatt.

About Chubb
Chubb is the world's largest publicly traded property and casualty insurance company. With operations in 54 countries, Chubb provides commercial and personal property and casualty insurance, personal accident and supplemental health insurance, reinsurance and life insurance to a diverse group of clients. As an underwriting company, we assess, assume and manage risk with insight and discipline. We service and pay our claims fairly and promptly. The company is also defined by its extensive product and service offerings, broad distribution capabilities, exceptional financial strength and local operations globally. Parent company Chubb Limited is listed on the New York Stock Exchange (NYSE: CB) and is a component of the S&P 500 index. Chubb maintains executive offices in Zurich, New York, London and other locations, and employs approximately 31,000 people worldwide. Additional information can be found at: chubb.com.