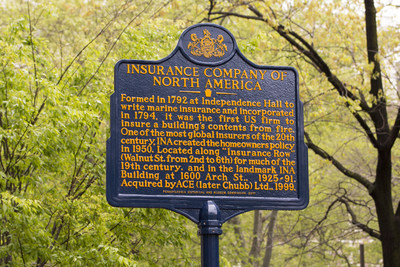 "This milestone is important to the Philadelphia region, as it underscores the caliber of our businesses and output from our area. It also serves as recognition of INA's positive influence on the community, and across the nation, and even stretching into the international marketplace," said Councilman Mark Squilla, District One, Philadelphia, during the dedication ceremony.

INA has operated in the Philadelphia area uninterrupted since 1792, and served as a cornerstone of Philadelphia's "Insurance Row" (Walnut Street between 2nd and 6th Streets), which was once the acknowledged center of the U.S. insurance industry. INA has been a subsidiary of Chubb (formerly ACE Group) since 1999.

INA has a storied history in the North American insurance industry; some firsts include introducing:

"Today is a very special milestone for our company, and we're proud of our company's heritage and legacy here in Philadelphia," said Robert Poliseno, Mid-Atlantic Regional Executive Officer, Chubb. "Additionally, Philadelphia continues to be a vibrant insurance marketplace and an important hub for our North American operations. As a global insurer, we operate locally to serve our distribution partners and customers."

According to the PHMC's nominating criteria, INA "had a significant impact on its times, and has statewide and/or national historical significance." After its dedication, the marker will be owned and maintained by the PHMC.

"Each PHMC marker establishes an important link to the past. I hope that this marker provides encouragement for further study and discussion as we celebrate the important role INA played in establishing the insurance industry when the United States of America was still in its infancy. Additionally, the marker recognizes INA's numerous marketplace innovations over its long history," said Nancy Moses, PHMC Chair.

The ceremony coincided with the 2017 Risk Management Society (RIMS) annual conference, the insurance industry's premier gathering to discuss influential themes and trends affecting the industry. The RIMS conference was held at the Philadelphia Convention Center.

About INA
The Insurance Company of North America (INA) was organized on November 19, 1792 and was the first incorporated stock insurance company in the United States. It is considered important nationally for its early formation and innovations, internationally for its 20th-century financial strength and global reach, and in Pennsylvania for its nearly 225 years of Philadelphia residency. INA served as a cornerstone of what was once known as "Insurance Row" (Walnut Street between 2nd and 6th Streets).

About Chubb
Chubb is the world's largest publicly traded property and casualty insurance company. With operations in 54 countries, Chubb provides commercial and personal property and casualty insurance, personal accident and supplemental health insurance, reinsurance and life insurance to a diverse group of clients. As an underwriting company, we assess, assume and manage risk with insight and discipline. We service and pay our claims fairly and promptly. The company is also defined by its extensive product and service offerings, broad distribution capabilities, exceptional financial strength and local operations globally. Parent company Chubb Limited is listed on the New York Stock Exchange (NYSE: CB) and is a component of the S&P 500 index. Chubb maintains executive offices in Zurich, New York, London and other locations, and employs approximately 31,000 people worldwide. Additional information can be found at: chubb.com.